Currently, we are treating our kitty for self-mutilating behaviors. We are $700 into tests and the vet told us she needed enrichment because this looks to be boredom induced OCD. We picked this because it only activated when she interacted with it, it was chargeable, and it would active her hunting instincts (something she doesn't get to do in a 3rd story condo).This. Is. Awesome!!! For the first minute it freaked her out a little. Then came the killing. And then the parading through the house with her trophy. Then more killing. This is now her FAVORITE toy. Watching my teeny tiny cat walk through the hallways straddling and dragging a struggling fish is the highlight of my day. It charges FAST.

I work 8 hours a day after the pandemic. My "pandemic" puppy is now grown attached to me & has a little bit of seperation anxiety. I've done the filling the Kong with peanut butter, new toys, etc but the floppy fishy probably has worked the best.

My little kookie has been playing with the fish so much that he can't wait till i charge it again. So happy to have this.

So far, so good… Makes them have super good naps because of the fun & long play with the flopy fishy. I have had no problems with it whatsoever and my dogs absolutely love it. Not just for a day, but over the last few weeks, both of them are still interested!!!!!! and that’s saying a lot because they're very picky and usually loses interest quickly.

I will get another one so they don't have to share. That's how much they love it!

My border collie LOVES it! He hasn't put it down since I took it out of the box!

Well made and fun! Loved watching these flop around and my dog playing with them. Glad they have an off switch too, because hearing them flap around in the middle of the night is not the best.

This is a delightful toy for a dog. It is now over a month since I bought it and he's still playing with it constantly. It may be slowing down a bit from daily use at this point, but I'm actually surprised it has lasted this long given how much he temples around the house with this thing. Lots of fun. 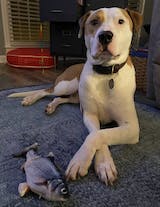 I absolutely love it. The moment I opened the box and flicked on the switch my husky was playing and having fun with it. I was laughing pretty hard as well. I took a video and sent it to some of my family members and they were asking where I got it so they could get one for their dogs. The movement is lifelike and engaging for a dog. The motor is quiet and not bothersome. Overall an excellent product, I highly recommend! 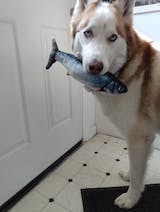 Got this for my 8lb Chihuahua and she ABSOLUTELY LOVES IT! Love how it turns it self on when she touches it keeps her interested all the time. 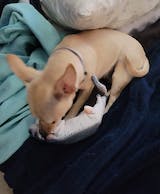 My dog loves it! He can't get enough of it and it seems to be his favorite toy!! He did tear the fin but that was after weeks of playing with it. 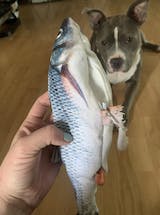 This was his favorite toy for a while. He still plays with it, but only every so often now.

The battery lasts anywhere from 30 minutes to 2 hours depending on how much my dog is playing with it. Its easy enough to charge: a micro usb port behind a zipper. The issue is, I have to remember to charge it and turn it off. When he brings it to me its usually dead because I forgot to turn it off.

I work 8 hours a day after the pandemic. My "pandemic" puppy is now grown attached to me & has a little bit of seperation anxiety. I've done the filling the Kong with peanut butter, new toys, etc but the floppy fishy probably has worked the best.

My little kookie has been playing with the fish so much that he can't wait till i charge it again. So happy to have this.

I've bought plenty of toys for my dog but he seems to get tired of them in a few days. But this is the best purchase ever!! He has been non-stop playing with it ever since I got it 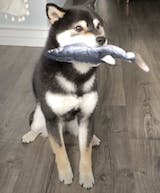 I was surprised at how sensitive the detector was. It was just right! I was worried that small taps wouldn’t trigger it, but it does! The movement of the toy does make a clicking sound. They were skeptical of the toy to start, but I can hear them playing with it when I’m out of the room. Don’t worry, if you don’t want to hear the sound while you sleep, just turn it off! I’d definitely recommended this kicker fish!

I could not be more surprised. I'll hear it going when I'm not in the room - she likes to mess with it. At first she ignored it. But I discovered she soon started playing with it.

I'm happy to say this toy exceeded my expectations. It took just a few minutes to charge, and one of my two dogs took to it right away. He rolls around the toy, clutches onto it, and bites it.

After a week or so of my dog occasionally playing with the fish, it ended up underneath a cabinet where I found it over a month later. The fish fired right up, still kicking from the original USB charge. That's pretty impressive.

On the plus side, the fish has a remarkably realistic print on it. On the negative side, the gears moving the tail make a zzzzp, zzzzp, zzzzp sound, but that's nothing out of the ordinary for a toy like this. My cat doesn't mind the noise one bit.

I am buying two more of these for Christmas for family members' dogs.

She loved it, so that's all that really matters. I like that it has a touch sensor and turns on when she wants to play/touches it and turns off after a few seconds of non-contact.

Not sure if he loves it or loathes it, but it sure is entertaining! It's soft and fun! He attacked it for about 20 minutes and wore himself out.

I bought it for my dog. Well worth the money. Watching it slapping my German Shepard in the face before he finally understood how to play with it. Lol

I bought this fun toy for my cousins dog for Christmas. Buddy had so much fun playing with it. It seems very durable.

A
Floppy Fish™ Cat & Dog Toy Anne Marie
My dog is having so much fun!

This is the first toy that has kept my dog interested for a while. It is durable, has a good battery life, and a somewhat realistic appearance. Lots of enjoyment ahead while you watch your dog getting to know this toy!

This is a great product, durable and life like. My dog just loves it and carries it around like he just landed it himself. I really like that it stops swishing it's tail and plays dead then once he touches it with his paw or pounces on it then it starts up again and even changes how fast the tale flops back and forth. I can't tell you how many videos I've taken and the laughs I've had watching him playing. It is easy and quick to charge with the included charging cable and charger. This is a MUST have toy!!!

My sisters little dog absolutely loved this toy. I would recommend this fish. They play for hours with it. She carries it around and bats at it when it moves. So fun to watch!!

I got these for my small dog (mini dachshund)and it was a big hit. Must be charged, but it’s better than batteries. So far he’s swung them around and chewed on them a lot & they are still holding up and flipping! Very cute and funny.

When it is too hot outside and my dog is bored, she'll stalk the fish and pounce. This keeps her entertained for a long time. The batteries seem to last along time between charging, When charging is required they charge fast..

My dog LOVES this toy. He walks around w/ it flapping in his mouth just so happy. Despite some pretty solid bites from him the mechanism still works. We are having a hard time getting it away from him so we can recharge it (he cries at the charging station until it's done) This is amazing and we love it.